The city of Hyderabad never fails to attract tourists. Apart from its majestic monuments and modern attractions, the city is known for various temples with rich cultural heritage. Yadagirigutta is one of the prominent attractions. Located 66 kms from Hyderabad, this famous pilgrimage town is the abode of Lord Narasimha Swamy. This is one of the largest temples carved in granite. According to legend, a sage called Yadarishi, son of sage Rishyasrunga, performed a penance inside a cave, with the blessings of Lord Hanuman. Pleased with his devotion, Lord Narasimha appeared before him in five forms namely Jwala Narasimha, Gandabherunda, Yogananda, Ugra and Lakshminarasimha which later manifested into a sculpted form and came to be known as Pancha Narasimha Kshetram. The cave temple is situated at an altitude of 300 feet on a large hillock. The place is well connected by road and has all the amenities for pilgrims. One can also visit nearby popular destinations. Let’s take a quick look at some of the popular attractions near Yadagirigutta. 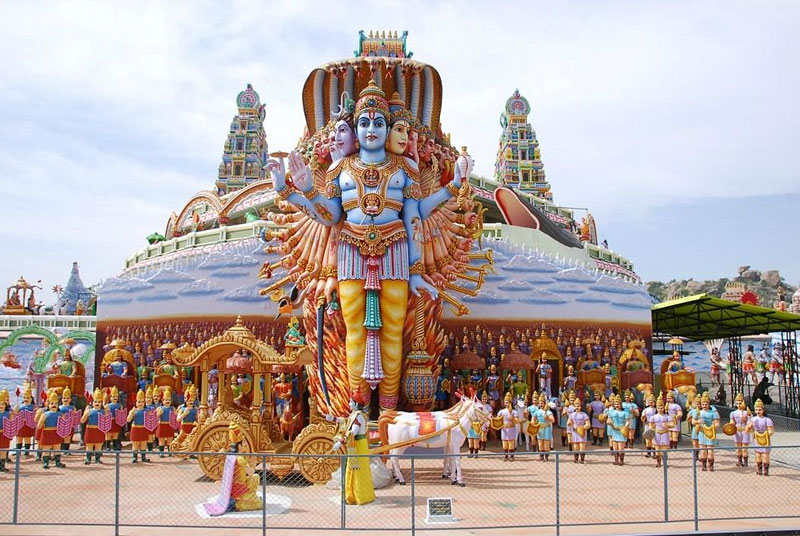 Surendrapuri Kunda Satyanarayana Kaladhamam is India’s first ever mythological museum and one of the popular attractions near Yadagirigutta. Surendrapuri is dotted with stunning replicas of India’s famous temples from Vaishnodevi to Somnath to Kashi and Rameshwaram. One of the best places to visit near Hyderabad, this mythological wonderland showcases over 3000 beautiful sculptures and statues depicting India’s rich cultural past. One gets to see significant aspects from mythology from the churning of the oceans to obtain the nectar (Ksheera sagara mathanam), Char Dham pilgrimage, larger than life statues of deities, resplendent sculptures, Navagraha temples and celestial world. An audio guide further makes it more engaging and informative as one takes a glimpse of the architectural marvels here. Located in Yadadri, Surendrapuri is a 2-hour drive from Hyderabad. The place is open from 9am to 7pm. 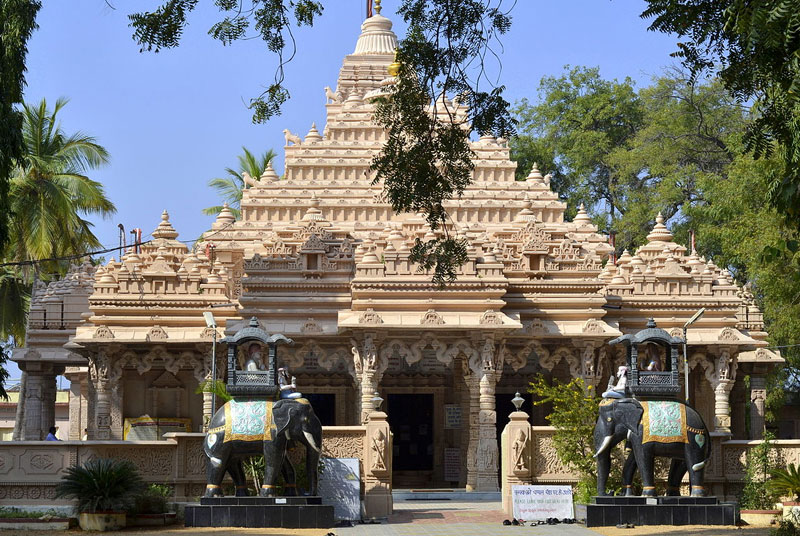 Also known as Kolanupaka temple, Kulpakji Jain Mandir is yet another tourist attraction near Yadagirigutta. The temple is located in Kolanupaka village near Aler in Yadadri district. This ancient temple dating 2000 years, was said to have been built by king Bharat Chakravarti. Kolanupaka has been a prominent place of Jainism since early times. The rarest deity of Lord Rishabhanatha was made out of a precious green stone. Other idols include Lord Mahavira and Lord Neminatha. Located 22 kms away from Yadagirigutta, this temple is dedicated to Lord Adinatha, the first Thirthankara of Jain religion. 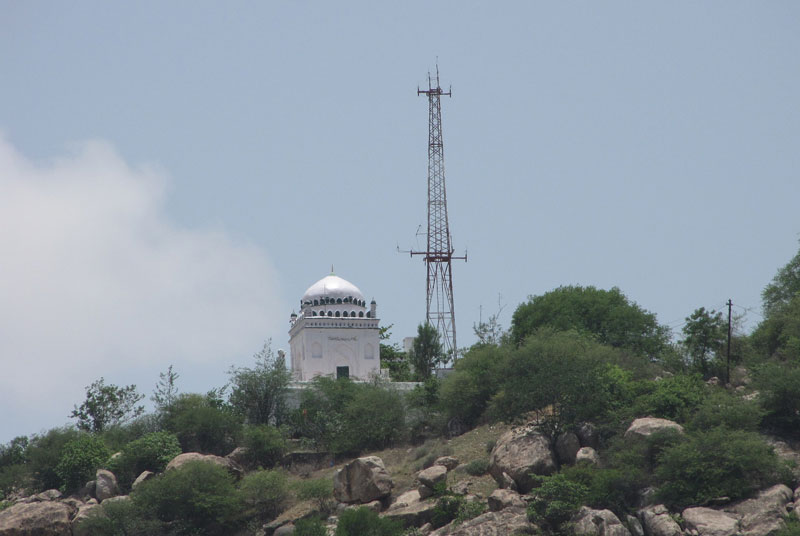 This hill located in Nalgonda is one of the popular pilgrim and tourist attractions near Yadagirigutta. A sufi shrine is located on the top of the hill. There is also a fort on one of the hills. The serene atmosphere and a cultural association make it one of the most popular tourist destinations. There is a large reservoir of water within the hollow of the rock. A three-day Urs (annual festival) is conducted here every year, where people from other religions also join the procession. Located 107 kms away from Hyderabad, the place can be reached in private vehicles and public transport as well. 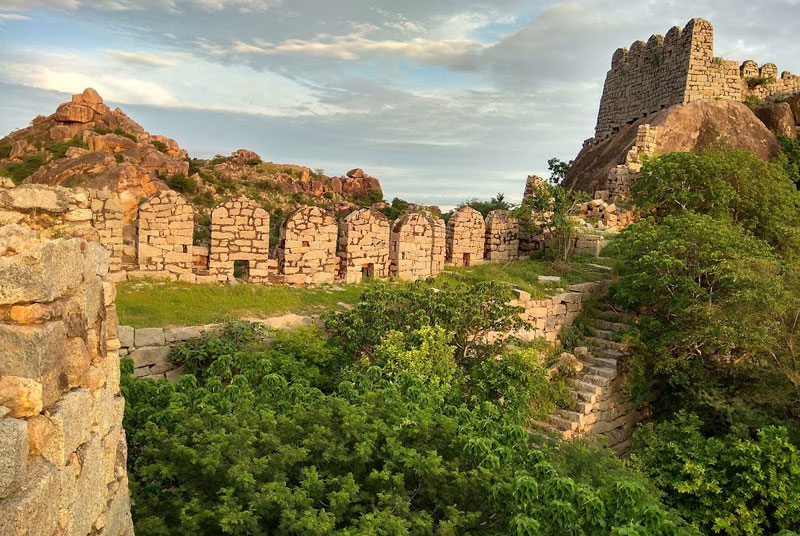 Devarakonda is a village in Nalgonda district and is one of the tourist attractions near Yadagirigutta. The place is known for its astonishing fort which has temples of Rama and Shiva in its premises. Located 60 kms away from Nalgonda and 111 kms from Hyderabad, this fort is famous for architectural splendour. It is surrounded by hills and forest. The fort complex is built up to 2 storeys and have granaries too. 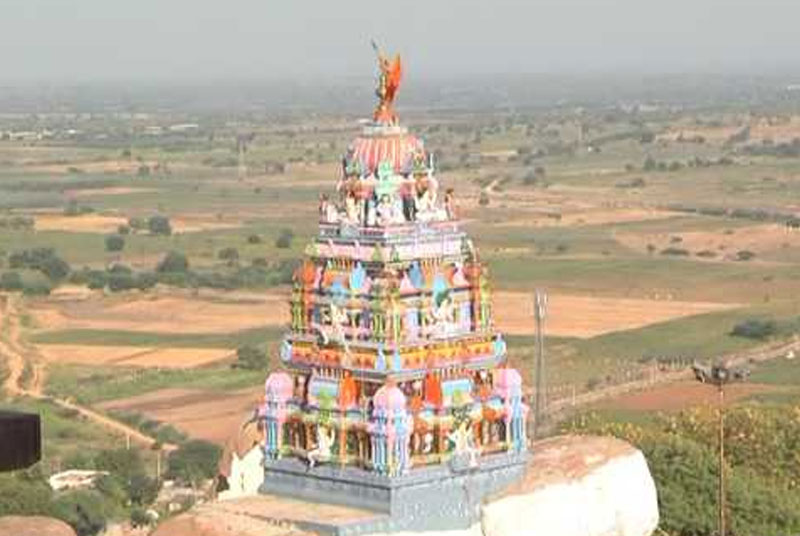 Yet another must visit tourist attraction near Yadagirigutta is Cheruvugattu Shivalayam, a famous temple dedicated to Lord Shiva. Several devotees throng the place during Shivaratri. 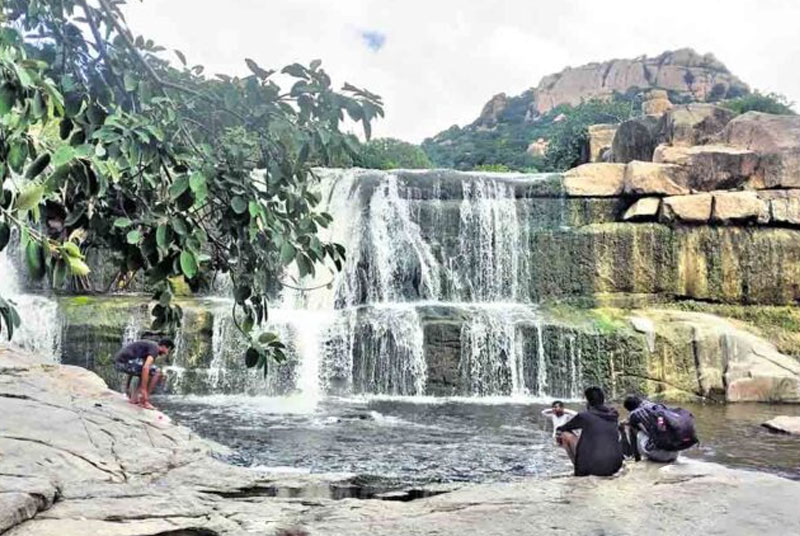 If you are looking for scenic attraction near Yadagirigutta, head to Bugga waterfalls, two and half hours from Nalgonda. It is a serene place and is a best place to visit during Monsoons. The stream flows through layers of rocks and boulders. One has to be careful as the rocks are slippery. 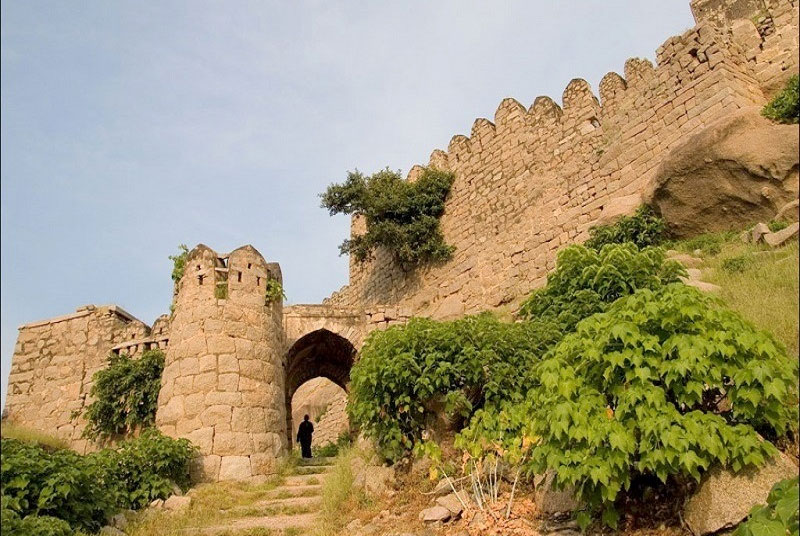 Bhongir fort also known as Bhuvanagiri fort is a perfect getaway from the hustle and bustle of the city. One of the famous historic attractions near Yadagirigutta, Bhongir fort is around 11 kms from Yadagirigutta. This fort was built on a massive monolithic rock near Nalgonda. The rock climbing offers a thrilling experience. Sprawled over 40 acres of land, this fort was built in the 10th century by the Western Chalukya ruler Tribhuvanamalla Vikramaditya IV. The inner courtyard includes granaries and military houses. This ancient monument’s secret passageways, stone sculptors and a temple make it one of the best places to visit near Hyderabad. Bhuvanagiri is well accessible by train and road from Hyderabad. 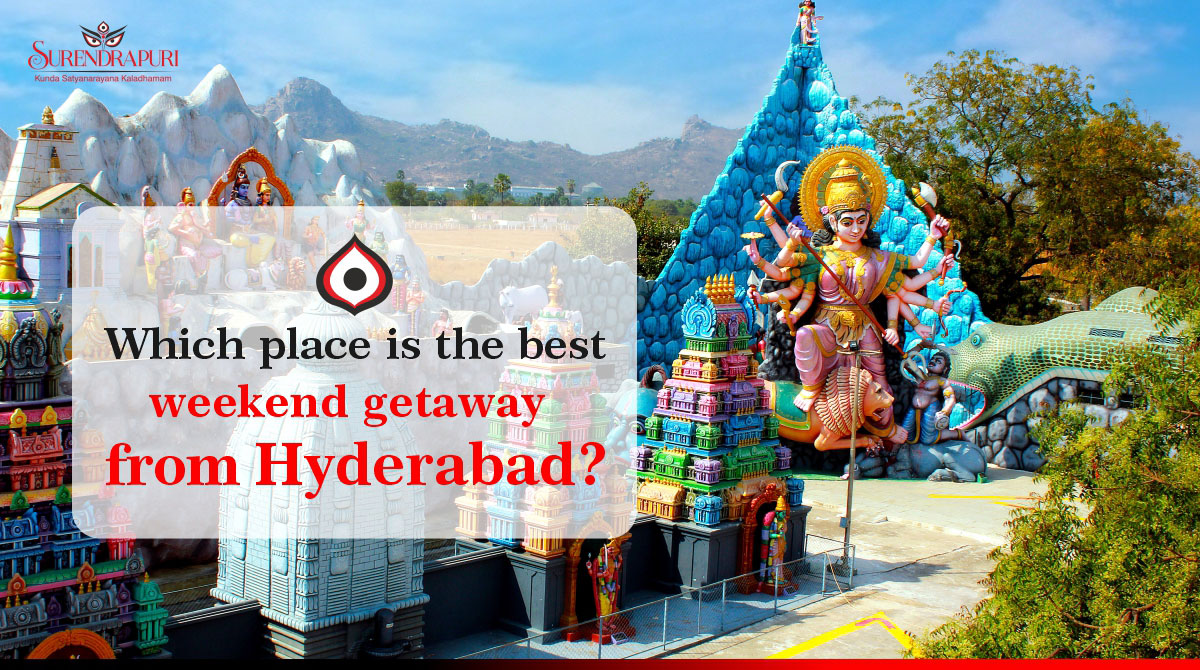 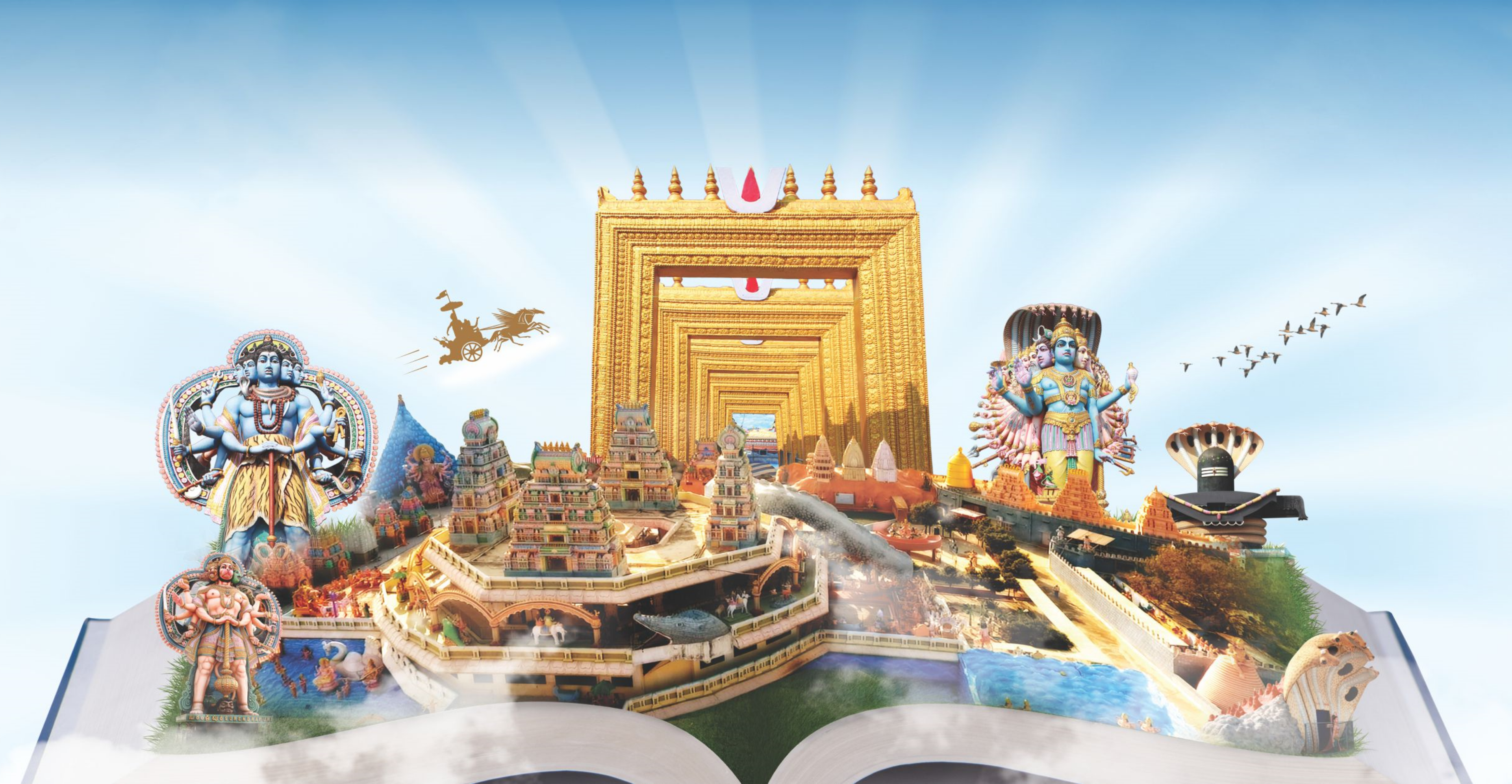 Best places to visit near hyderabad-telangana 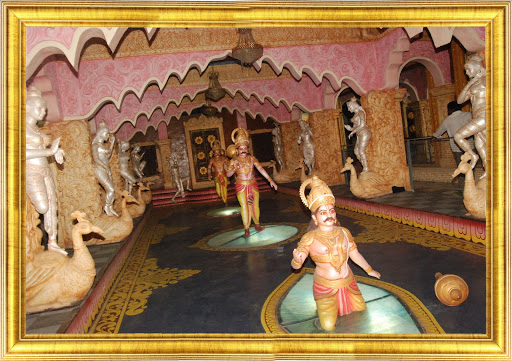